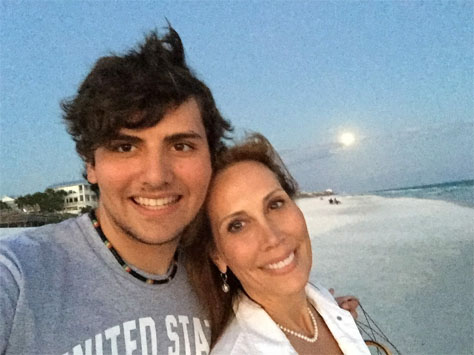 Sharon Lyda Rauh's vision began when she was a young girl of 10 as she observed her mother’s daily transformation from an ordinary housewife into an elegant, sophisticated woman. Sharon was fascinated with her mother’s sense of style. She felt in some way destined to carry on her mother’s desire and appreciation for artistic elegance.

Sharon's mother Adriana was born in Florence, Italy, the epicenter of classic art and beauty. Because Sharon had family ties in Italy, she was given many opportunities to travel and explore Europe.

Sharon was keenly aware of the beautiful people who traversed the historic streets and byways of Europe.

Every face, be it young, old, male or female, became an art pallet to Sharon. Fashion influenced her modeling which led to even more exposure in fashion and beauty. She later decided to undertake a position as a buyer of designer clothing for a multi-state department store. Although she enjoyed her work as a clothing buyer, she was interested in investigating a career as a flight attendant. Her career with American Airlines spanned a time period of over twenty years. During her service as an airline attendant, Sharon observed the detrimental effect of constant atmospheric change had on her skin. When time permitted, she fortunately scheduled frequent facials in Paris, Rome, Munich and New York.

Sharon’s vision became crystal clear—she wanted to focus on skin health and beauty. She earned a degree as a registered nurse while continuing to work as a flight attendant. Her informal skin care education was a compilation of testing and experimenting with everything she had been introduced to from renowned skin care experts all around the globe. Sharon’s friends and family were always interested in her skin care regimen. She was always eager to share her secrets about the importance of beautiful healthy skin, how to obtain and maintain it.

Unfortunately, a twist of fate brought Sharon’s dream to an abrupt stop when she was involved in a seven car multi-trauma accident that left her badly broken and unable to walk for several months. During this painstaking period, her unending faith and trust in God kept her positive and hopeful. She pressed on despite insurmountable obstacles and was intent on fulfilling her dream.

Sharon has one son, Gianluca, who is currently studying biomedical engineering and health at UAB in Birmingham, Alabama. She is an avid animal lover and enjoys working with her two German Shepherds, Nick and Sophia. She owns, manages and greatly enjoys quarter horses and miniature horses.

Sharon has combined her professional, personal and training experience to offer the very best in cutting edge medical grade facials in the North Alabama area. She chose the name Encore because she knows she was blessed – with just that – an encore – a second chance to carry on her life and to give back. In Sharon’s own words, “Everybody Deserves an Encore!”